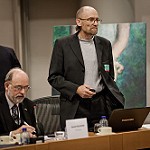 European nations are deeply divided over EU membership. In the context of persistent economic slowdown and mounting external threat, there is an urgent need to reformulate the European project to prevent centrist politics across Europe losing further ground to the extremes on both left and right.

Reactions to Brexit suggest that the EU has run ahead of its popular mandate.  The proliferation of foreign cuisine, budget air travel, and international sport has not created a strong enough sense of European consensus or identity to sustain EU institutions in their current form. Exposure to migrant flows has intensified fears about identity, security and standards of living.

Underlying this are problematic structural relationships embedded in Europe’s economy. The Euro leaves peripheral nations with no way to rebalance using currency devaluation. Capital mobility often moves investment away from the areas where it is most badly needed. And, in common with much of the Western world, European nations struggle with their reliance on debt finance.

The report analyses Europe’s key internal relationships and asks whether it is practically and politically possible to formulate them in a way that would both ease the economic pressure on European nations and provide a fresh vision for a European future.

We look forward to meet you at our event and we invite you to be part of the debate.