International Conference "After Capitalism: Economy, Values and Sustainable Society” was organized from 20 to 22 of September in Kiev by the Foundation for Assistance of Democratic Initiatives in cooperation with Sallux Foundation.

Several of the keynote speakers were amongst others:

• David John Lee, one of the co-authors of the concept of relationalism, representative of www.relationism.org (United Kingdom);

• Gabriela Urbanova, Member of the Board of Sallux Foundation, PhD (Slovakia).

After the presentation of the participants and opening remarks, Yuri Honcharenko, Vice-President of Foundation for Assistance of Democratic Initiatives made a report on the topic “Relational Economy; What Elements Can Be Implemented in Ukraine” which featured the book “Post-Capitalism: Rethinking the Economy”.
Thereafter, Andriy Hnidets, Head of Department at the National Health Service and a member of the Association of Christian Lawyers, spoke about his vision of “The role of Christian democracy in shaping of value-oriented public policy”. This report, as the previous one, also provoked a live discussion among the participants of the event.

The second day of the conference began with a report on "Economic Growth and Social Responsibility", made by Volodymyr Panchenko, Ph.D., director of the Institute for Social Studies. He, as one of the reviewers of the book "Post-Capitalism: Rethinking the Economy", spoke about his vision of this issue.
The presentation on "A Stable Society, Security and Prosperity as an Idea for Christian Democracy" was followed by a presentation by Christiaan Meinen, a representative of the Sallux Foundation and security expert.
Another representative of the Sallux Foundation, Gabriela Urbanova, spoke to the audience about her vision as an experienced economist of the “Relational Model of State and Economy as the Engine of Change for Ukraine's Future”.
The concept of relationalism as a philosophical and economic model is then presented by one of its co-authors, David John Lee, who is a member of www.relationism.org (UK).
After that, Oksana Horkusha, PhD, Senior Researcher at the Department of Religious Studies in Institute of Philosophy, gave a report on “Problems and Perspectives of Christian Values during the Ruling of Populism and Irresponsibility - Modern Ukrainian Context”.
The last speech of the second day of the conference was a report by a well-known public figure of the Ukrainian Galician Party, Bohdan Pankevych, on “What should we do in Ukraine with the current political landscape?”. 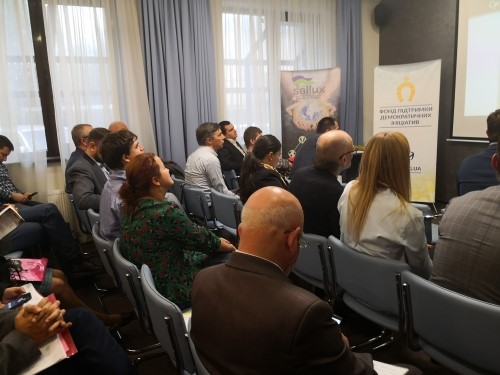 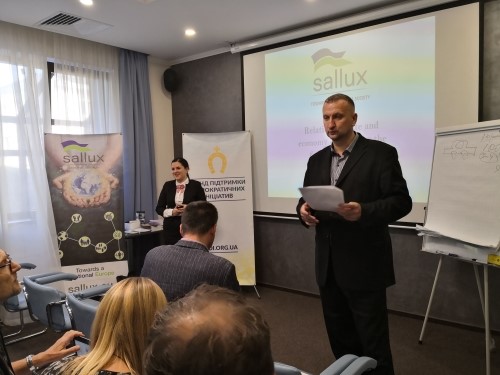 Ultimately, conference participants attended a morning worship on the last day followed by practical steps to implement Christian values in Ukrainian politics. Subsequently, the participants split into working groups and performed test exercises from a relationalism expert who aimed to demonstrate in practice the effectiveness of this theory. The results were presented in the form of short presentations.

Sallux thanks the FDI for the great cooperation and the organization of this impactful event.